skip to main | skip to sidebar

Terrorists Do Not Have Super Powers

I'm sick of hearing people suggest that it's "too dangerous" to put the 9/11 terrorists on trial in New York, as if somehow their very presence on US soil will cause a disaster. Now if, like my friend and colleague Dr. Plutonium, they had nuclear reactors in their stomachs, and their burps and farts were atomic blasts, I could see being afraid to bring them here (or to any country that serves fast food), but these are mere mortal mass murderers.

Likewise, I am vexed by the objections to moving Guantanamo detainees to supermax prisons. This week, Senate candidate, Mark Kirk claimed that if suspected terrorists are brought to Illinois' Thomson Correctional Center, "the Chicago metropolitan area will become ground zero for Jihadist terror plots."

Please, it's maximum security. If it's good enough for mobsters, and killers who chop people up and eat them, it's good enough for a wannabe shoe-bomber. Let me tell you from personal experience, even if you have a mind-control ray, an army of mutant henchmen, and have already replaced most of the guards with android lookalikes, it is very, very hard to break out of prison.

And really, what are the other options? Place them in suspended animation and launch them into space? Too expensive. Banish them to a parallel dimension? Yeah, people in parallel dimensions just love it when we send them our super-villains. Talk about a foreign relations nightmare!

What I find most surprising is the suggestion that it would be better to execute terrorists without trial. Rounding up people and killing them is not how America deals with it's enemies; it's how I deal with my enemies. The supposed leader of the free world can't just adopt the practices of a super-villain. There are union rules against it. Be warned, America; should you abandon your founding principles of due legal process, I will do nothing short of filing a complaint with the Super-Villains Guild, and not even Pres. Obama will be able to stop me.
Posted by Professor Fear at 1:48 PM 12 comments:

This blog is made possibly by the cooperation of my evil henchmen, Chris Pearson and Allan Piper. 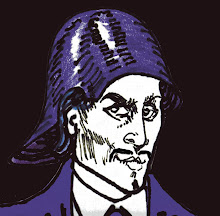